When you were a kid or perhaps when your children were kids, McDonald's restaurants looked a little different than they do today. Back then the Golden Arches were part of the design of the building. Today they're just a logo, something you see on the sign or the doors. 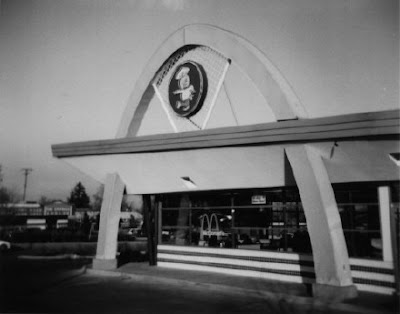 The first McDonald's I ever went to was on Broadway near Orchard in Littleton, Colorado (just south of Denver). It looked kind of like the picture above, but it didn't have a dining room - you ordered your burgers at the counter and ate in your car, or brought the food home. I'm convinced the basic McDonald's hamburger was the same then, although I'm sure they've made changes. It came with mustard, ketchup, a pickle slice, and some chopped-up onions, just like today. The Big Mac hadn't been invented yet. But the biggest difference has to be the French fries. Back then they left the skin on the potatoes - today's fries just don't compare. The cool McDonald's on Broadway later moved down the street and now it looks just like any other modern McDonald's.

I took the photograph at a retro McDonald's on Alameda near Federal here in Denver in January, 2007. You can click on the photo for a larger view. Or click here for a nighttime view: the Golden Arches at night
Posted by Joe at 12:10 PM

Hey Joe,
Wonderful photos of Mickey-D's. I was at the Henry Ford Museum a couple weeks ago photographing the same thing (well, the old neon sign anyway). I haven't had a chance to upload all my photos from that visit but you can see a couple of my McD pictures if you're interested. Notice the top of the sign... the price was 15 cents back then!

Your post brings back memories...not really of McDonalds, but of home. I grew up in Denver and went to Junior High School just a few blocks away from where your photo was taken...Rishel...although I guess it's a middle school now. I think there was a McDonalds at that location back when I was a kid, but I don't think it was a retro...thanks for the memories.