Ellis Island? Castle Garden? Which One? And When?

This article was updated on 8 October 2020

From August 1855 to July 1924, millions of new arrivals to New York City went through an immigration processing center. The most famous New York immigration centers are Ellis Island and Castle Garden. The least famous is likely the Barge Office, which was used briefly just prior to the opening of Ellis Island in 1892, and again following a fire on Ellis Island in 1897. The Ellis Island fire broke out just after midnight on June 15, 1897, destroying the buildings there. After the fire, newly arriving immigrants were initially inspected on Manhattan piers, then the Barge Office was again put to use. In 1900, new buildings were completed on Ellis Island, and the immigration center was reopened there.

Here's a simple timeline for when New York's immigrant processing centers were operating:On July 1, 1924 a new law went into effect which stated that immigrants were to be inspected at US consular offices in the immigrant's home country before coming to the US. Ellis Island continued to be used as an alien detention center until November 1954. The first person to be processed at Ellis Island in 1892 was a 17-year-old Irish girl, Annie Moore. The last Ellis Island detainee was a Norwegian merchant seaman named Arne Peterssen. 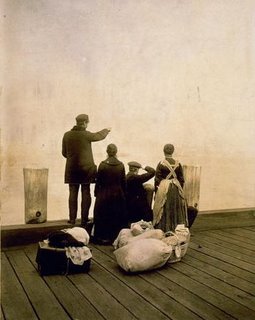 The Barge Office was located on the southeastern tip of Manhattan. Castle Garden, now called Castle Clinton National Monument, was located on a small island just off the southwestern tip. Later landfill has attached the island to Manhattan. Castle Clinton National Monument serves as a visitor information center for New York's National Parks and Monuments. You can also purchase tickets there for ferry trips to Ellis Island and the Statue of Liberty.

The passenger ships to New York didn't actually land at Ellis Island -- they landed at Manhattan and the passengers were ferried over to the island for processing. Generally only steerage passengers went to Ellis Island for inspection. Most of the first and second class passengers were allowed to leave the ship soon after docking. All passengers, however, were (or should have been) listed on the ship manifest (or passenger list). However, from June 1897 to early 1903, New York passenger lists contain the names of steerage passengers only (with some exceptions). Most of the lists for first and second class (cabin class) passengers for that period are missing. After January 1903, (and from 1820 to June 1897), the lists should include all classes of passengers. (See Marian Smith's discussion on this topic at the Avotaynu link in the sources section below.)

For help with other ports...

Thanks to INS/USCIS historian, Marian Smith, for her help with this article. 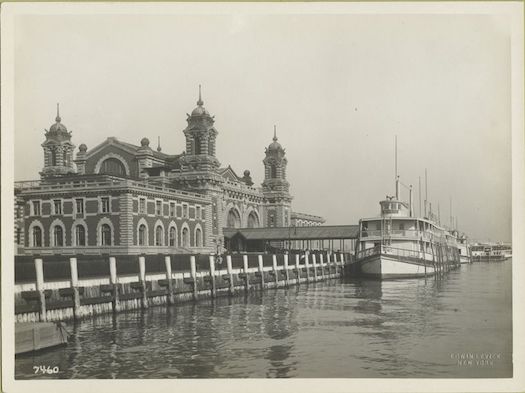 Those searching mid-nineteenth-century ship logs will likely soon discover that the handwriting was often little more than a scrawl, and can be very difficult to decipher. No doubt the poor soul whose job it was to record all the names and information these logs contain found it a tedious chore that didn't warrant his finest penmanship. After all, who would ever want to review these documents once they were filed away?

So if your searches of indexes fail to turn up the individual for whom you are searching, don't despair! That person may simply be hiding behind the tired, impatient handwriting of the agent that stymied the equally hard-pressed indexer. Obviously, this is a common issue with any index of handwritten records, but many of these ship logs are difficult to read even from good-quality microfilm images. Of course, searching under these conditions may mean resorting to visually scanning ship logs that cover weeks, months, or even years. So be sure to maintain a research log, and be willing to make the effort in stages. Your eyes will need the break!

Took me a long time to find my family. They had my grandfather's first name as Reznzt, it was actually Ernst, big difference, but I found them by the names, ages and sexes of the children that accompanied him. Then I could see why someone would make my grandfather's name so far off. It was difficult to read the writing and I could also see it was Ernst (since I knew what it should have been). I was able to send the updated information to Ellis Island so that future archivists would have the correct information.