Maria von Trapp, Austrian-born matriarch of the famous singing von Trapp family of Sound of Music fame, passed away in Vermont in 1987, and she can be found listed in the Social Security Death Index (SSDI) ...

Note that her surname lacks the "von" part and her death date is given as April 1987 without a specific day. Maria actually died on 28 March 1987 as can be seen in this listing from Ancestry's Vermont Death Index -- See: Vermont Death Indexes and Records ...

If you have a subscription to Ancestry's genealogy records collection, you can view her death certificate online here

While Maria died in a hopsital in Morristown, her death certificate shows her residence as Stowe, VT. Her usual occupation is given as "author" and her business or industry as "entertainment." The informant (person who supplied the information) was her son, Johannes von Trapp. Note the spelling of her surname in the index - Von Tropp) - it does look like Tropp, rather than Trapp, on the hand written death certificate.

When using the SSDI if you come upon a month and year only for the death date you can usually get the correct date from other sources such as the person's death certificate. Try the online death records directory for some online indexes and sources.

Also, when searching for surnames that contain more than one word you might try different variations like... Trapp, Vontrapp or von Trapp. 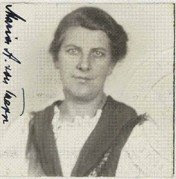 Georg and Agathe (Whitehead) von Trapp had seven children, all born in Austria: Rupert, Agathe, Maria, Werner, Hedwig, Johanna and Martina. Agathe von Trapp died in 1922 of scarlet fever. Georg and Maria (Kutschera) von Trapp, who married in 1927, had three children: Rosmarie, Eleonore, and Johannes. The first two were born in Austria. Johannes was born in Philadelphia while the von Trapps were visiting Pennsylvania on a singing tour. The family later settled in the United States.

Sound of Music Fun
In the Sound of Music movie, the real Maria von Trapp, along with one of her daughters and a granddaughter, did a "walk-on" and can be seen briefly in the "I Have Confidence" segment behind Julie Andrews.

Very interesting, Joe. Thanks for the info. I loved the movie... didn't realize the real Maria appeared in it. Now I'll have to go back and watch it again to see what she looked like ;-)

I enjoyed your information on the family. I remember hearing them sing and the movie did an excellent portrayal. I remember reading that Marie was not as sweet and airy as played in the movie and even had disputes with the children in later years, resulting in loss of communication.

Thanks for the comments, Jasia and Delores. I'm glad you enjoyed the Sound of Music blog post. If anyone wants to check out Jasia's blog just click on her name in her comment above.

Thanks for your info about Maria. I didn't realize she appeared in the movie, either.

I was very fortunate to hear her speak IN PERSON in about 1969 or so. It was a talk sponsored by a church and held in a small theater in Rochester, New York.

At that time, she was a warm, likable, roly poly grandmother with a mischievous look in her eye. She was an excellent speaker, and she discussed her adventures as a missionary, including being offered the cheeks of some departed people by cannibals. True or not? I don't know. I believed her at the time. I could envision her as a young woman going through the adventures she did.

I love the movie, but it's too bad people think Julie Andrews IS Maria von Trapp and that the movie is exactly like real life, when it wasn't.

Someone mentioned the costumes. I visited Germany in 1975, and in some towns,especially to the south, townspeople DID wear dirndls and lederhosen (the traditional dresses and leather shorts). I would imagine that before that, they were pretty much the same even in the 1930's and 1940's. The captain's girlfriend was the only one who looked really dated to me, but who could blame them -- she looked sixties to us, but maybe that overly made up look was also considered "city/glamorous" in the 1930's, too? Maybe.

And about Maria not being sweet and airy. WHO IS? She was human. But in her speech, she was fun, intelligent, and witty.

I have read two of Maria von Trapp's books. One was, as you know, The Story of the Trapp Family Singers. Another was Maria, published 1972 by Creation House. In it Maria shares how dismayed she was that the musical and movie portrayed her beloved Georg as a stern authoritarian, when instead he was a gentle, loving husband and father. She also talks about her travels around the world, and yes, visiting cannibals! Looking at my local library's online card catalog, I have discovered that there is another book that I have not read, titled A Family on Wheels: Further Adventures of the Trapp Family Singers, co-authored with Ruth T. Murdoch (pub. 1959 by Lippincott).

My aunt has visited the lodge in Stowe, Vermont, and just a couple of years ago, went to a concert by the Trapp Family Singers (who are now the grandchildren). As a birthday gift for my mother, my aunt had all the grandchildren autograph Mom's birthday card.

Very interesting and informative post, thank you for sharing your findings. The Sound of Music is one of the all time favorites.

The ral Von Trapp family lived in The Netherlands for a short period. One family claims they lived in Warmond, but others say they rented a cottage in Loenen GLD. Who knows anything about this period?