Online Tools For Adoptees, Genealogists and Other Missing Persons Searchers

The directory of online people searching tools listed below has recently been updated. Included are telephone and address books, public records, vital records resources, and information about Area Codes, Zip Codes and the Social Security Death Index. You might find the directory helpful for locating old friends and family members, or for adoption related searches...

Finding Living and Recently Deceased People in the USA - Online Tools For Adoptees, Genealogists and Other Missing Persons Searchers
Posted by Joe at 10:59 AM No comments:

Ancestry has added a name index and digitized images for the 1851 Census of Canada to its collection of online genealogy databases. The 1851 Canada census includes the areas of New Brunswick, Nova Scotia, Canada East (Lower Canada, or roughly Quebec), and Canada West (Upper Canada, or roughly Ontario). Not all of this census has survived. Some of this census was actually taken in 1852.

For links to the 1851 Canada census, and more online indexes for Canada census records see: Canada Census Records and Indexes

Americans... today you are 1 of 300,000,000. The U.S. Census Bureau
has reported that the total population of the United States reached
300 million at about 7:46 (EDT) this morning. The U.S. reached the 200
million mark in 1967 and the 100 million mark in 1915. Presently in
the United States there is one birth every 7 seconds, one death every
13 seconds, and one international migrant is added every 31 seconds.
This adds one person to the U.S. population every 11 seconds. You can
see the Census Bureau's population clock at: U.S. Population Clock

What does it cost to count you?
This webpage lists what it cost the U.S. government to take the decennial federal census for each of the census years: The Cost of the US Census and Population Figures 1790-2000

Autumn in the Cemetery

I thought I would add a bit of color to the blog today. What a beautiful time of year to wander through a cemetery... 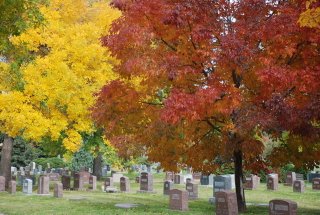 If you have any ancestors or relatives who enlisted in the US Army during World War II, you might be able to find them listed in the Army Enlistment database provided by the National Archives (NARA). The original computer files for this database were created in 1994 by the Bureau of the Census at NARA's request. The Census Bureau used their "Film Optical Sensing Device for Input to Computers" (FOSDIC) system from a series of 1,586 microfilm rolls of computer punch cards. The original punch cards, which had basic information about enlistees when they entered the Army, were destroyed after being microfilmed in 1947. Unfortunately 212 microfilm rolls could not be converted to computer files because the card images were too dark. In 2002 NARA edited, merged and cleaned up these files, then later put them online. They can be searched from: Access to Archival Databases (AAD) Click on "World War II" when you get there.

The Army Enlistment database contains 9,200,232 total records. You will find some errors in the database due to all the changes and editing the originals went through from punch card to microfilm to computer files. Also, about 1.5 million punch cards were not readable by the FOSDIC system from the original microfilm so the database is incomplete. NARA considers the database with its 9 million entries to be a "best guess" file. Note that the database is for United States Army enlistments, including the Women's Army Auxiliary Corps (WAAC or WAC), and not other branches of the service. Despite the errors and omissions this is still a great tool for finding basic information about WWII Army enlistments.

The National Archives also has an excellent article about the creation of this database: The World War II Army Enlistment Records File and Access to Archival Databases