I've been looking over the basic information given for each person and household in the 1940 U.S. federal census (due to be released on April 2, 2012). Some of it is the same or similar as the information given in the 1930 census. But three items from the 1940 census stood out as being, well, kinda cool...

"In What Place Did This Person Live on April 1, 1935?"
The census form states: "...For a person who lived in a different place, enter city or town, county, and State, as directed in the Instructions. (Enter actual place of residence, which may differ from mail address.)" Column 19 in this section asked for: "State (or Territory or foreign country)." We'll now know where someone was living half way between the 1930 and 1940 censuses, including if they were living outside the USA. Pretty cool. 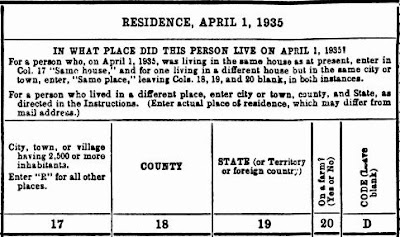 "Income in 1939"
Ever wonder how much your ancestors made? The 1940 census should tell you. From the census form: "Amount of money wages or salary received (including commissions)." And: "Did this person receive income of $50 or more from sources other than money wages or salary? (Yes or No)." Leaving you to guess what those other sources might be. Also, the value of the home (if owned) or the monthly rent (if rented) is given in the "household data" section. So you'll get a little glimpse into your ancestor's economic life. Definitely cool.

Enumerator instructions quoted above are from: 1940 Census: Instructions to Enumerators (large PDF file)

I'm totally interested in the Where did you live in 1935 column. My Great-Grandmother died in 1935 and I'm interested to see the information on where she was with my Grandmother that year.