Mamma Mia! and the Joy of Choosing Your Own Ancestors

Yesterday I went with my mom to see the movie Mamma Mia!. I am such a good son, taking my mother to see this completely ridiculous campy musical extravaganza. I also saw the Broadway musical version last year with my mom and two other friends. And now I'm going to admit that I'm an Abba fan. I've liked them since I was a young sprog and they were still together making records. And all married to each other. And I honestly thought I would hate Mamma Mia!. But I admit I liked the thing. It's just so silly and uplifting and fun. And it's filled with Abba songs. Tons of them. The movie is just about as much fun as the stage musical. And Meryl Streep looks like she's having a blast throughout. 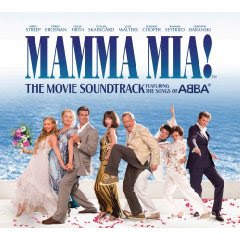 So now I know what you're thinking: What does Mamma Mia! have to do with genealogy? C'mon theatergoers, it's soooo obvious. The girl has three dads! And she doesn't know which one is really her dad. Sophie's mom had brief affairs with three men right in a row some twenty years ago. And now Sophie, who's about to be married, wants to know who her dad is. So she invites all three to the wedding. And they all show up. Mayhem and Abba songs ensue. C'mon if you had three dads wouldn't you dance around and start singing "Voulez-Vous" for no reason? While most of us are trying to figure out who our great great great great grandparents are, this poor girl has three potential dads lined up in a row and she doesn't know which one is the right guy. Hey, even own her mother, Meryl Streep, doesn't know. Now before you can say, "DNA test," please consider this: there are no Abba songs about DNA. Nope. Nothing about genetics either, or genealogy, or having three dads. And consider this: Sophie's dad is one of the following...

Er, actually that would be:

1. Pierce Brosnan
2. Colin Frith or Firth I can never remember which
3. A fine Swedish actor whose name I can't spell

Now would you have a DNA test, or perhaps just choose Mr. Darcy? Personally I think I'd run off with Sophie, who is just as cute as can be. Er wait a minute I've gone off track here. So pretend for a moment that you get to pick your ancestors. It would make genealogy sooo much easier. Yeah, I'm not sure if I'd want that Jane Austen dude as an ancestor, so I'm going with Remington Steele. Even if he can't sing. And for my grandparents... hmmm... let's see...

All right now back to some real genealogy. Everyone go click on some links over on the right side.
Posted by Joe at 11:59 AM

I live in Swden, and I have yet to see this movie, but everyone says it is great fun.

Anyway the Swedish actor is Stellan Skarsgård, and he has also three sons, also actors. One of them is named Alexander (I think) and he seems to be doing fine in Hollywood.

Actually I knew who the Swedish actor was. I was just too lazy to Google his name. Hey I can't spell Frith or Firth either :)

I saw the play Mama Mia in Chicago a number of years ago, and although I was not an Abba fan at that time I am now. Planning on seeing the movie tomorrow. Thanks for the great review.
My vote for Sophie's dad would be Remington Steele!

this is one of the only plays i've ever seen, which ended up being great... it's funny to think of ol' Pierce taking a stab at singing, yeeesh

Your post is perfect. Three generations of my family saw it and we all surreptitiously squeezed out a few tears of joy. ABBA RULES! Streep wasn't bad, either.

What fun! Now I've got to go see this movie --- instant ancestors and invent an ancestor a few months ago and now "pick a dad." LOL!