I drove up to Boulder this afternoon to visit Columbia Cemetery, where I met with Mary Reilly-McNellan, who is the Project Manager for Columbia Cemetery Preservation. I had emailed her last week to ask if I could photograph Jane Doe's grave marker, which has been put away for safekeeping. Mary showed me where Jane's grave marker was locked away and I took a couple of pictures. The grave marker is no longer on the grave because the cemetery's keepers are afraid of vandalism - the cemetery was badly vandalized earlier this year. And Jane Doe is well known in Boulder for being a mystery. 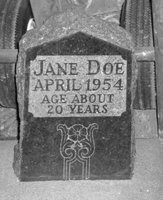 In April 1954 a young woman's body was found by hikers in Boulder Canyon below Boulder Falls. She was thought to be between 17 and 20-years-old. Despite many leads and tips, the Boulder County Sheriff's Department was never able to identify the body or find the killer. Boulderites contributed funds to pay for a burial plot, Howe Mortuary provided a casket, and a grave marker was donated by the Boulder Marble and Granite Works.

In 2004 Jane's body was exhumed. A DNA sample was obtained and her face was reconstructed. Numerous newspaper articles have been written about her and a website has been set up. In March of 2006, the Rocky Mountain News reported a theory by Boulder County Sheriff's Detective Steve Ainsworth that Jane Doe may have been murdered by serial killer Harvey Glatman, who was executed in 1959. An episode of TV's America's Most Wanted with a segment on Boulder's Jane Doe aired on July 8, 2006. This was the first time the reconstruction of Jane Doe's face was shown on national television. Fifty-two years after her death, her identity remains a mystery. However...

Here is Jane Doe's grave in Columbia Cemetery with its missing marker (as it looked in 2006). Note the single rose someone has left on the marking post. (Click on either photo for a larger view.)

Thank you for your interest in Boulder Jane Doe. She may be unidentified, but she has an extended family made up of the people who care about her.

Today, April 8, 2009, is the 55th anniversary of the day that two students found Jane Doe's body on the rocky edge of Boulder Creek, nine miles west of Boulder, Colorado. Of course we know a lot more
about this murder victim today. Throughout the recent investigation, she gained an extended family of people who care. I will place red roses on her grave today on behalf of us all.

My book on this case – "Someone's Daughter: In Search of Justice for Jane Doe" – is now available in stores and online, or get a signed copy from me at www.silviapettem.com.
Thanks, Silvia Pettem

Today it was announced that they have determined the identify of Boulder's Jane Doe - her name is Dorothy Gay Howard and her family has been found. What incredible work by all of those involved - after 55 years!